Dynamic Business: How can a young leader be a great leader?

More than ever before, we are seeing young people taking on significant leadership roles. Your employer might have put you on the fast track to leadership. Or if you’re following in the footsteps of someone like Mark Zuckerberg, you may have founded a start-up and successfully grown it. Either way, you will have likely found yourself leading a large number of people, many of whom will be older and more experienced.

I was still in my twenties when I found myself leading a large team. This was no ordinary team. The team was a division of a leading consulting company. Everyone had a double degree or more. More than half the team was older than me. I was not yet a Partner but had three Partners in my team, all in their fifties, one of whom was the previous leader of the Division. I had never had any material people management responsibilities but was now conducting performance reviews on people who had conducted hundreds of them. Some of these people had spent six times longer in the profession than I had!

So what do you do if you are a young start-up founder/CEO/MD leading a workforce of older staff? How do you speak on an even level with people who have more experience? How do you deal with older staff members who may not take you seriously?

It’s not easy. The reality is that age and experience can be valuable and can’t easily be substituted.

Robert Kegan from Harvard has studied how adult mental development can move through three stages, from the ‘socialised mind’ to the ‘self-authoring mind’ and to the ‘self-transforming mind’, as we mature. 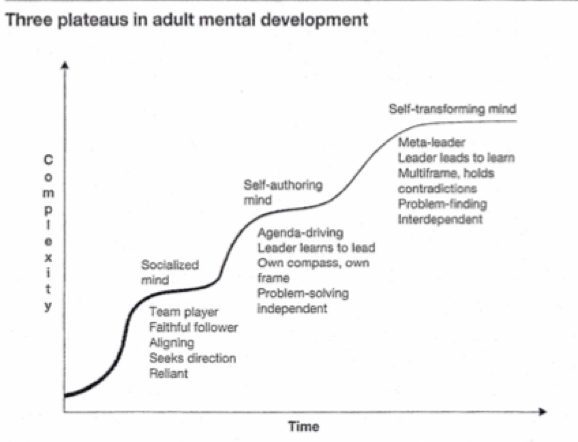 According to Kegan, “on the basis of thirty years of longitudinal research, mental complexity tends to increase with age”. The following graph depicts this clearly. 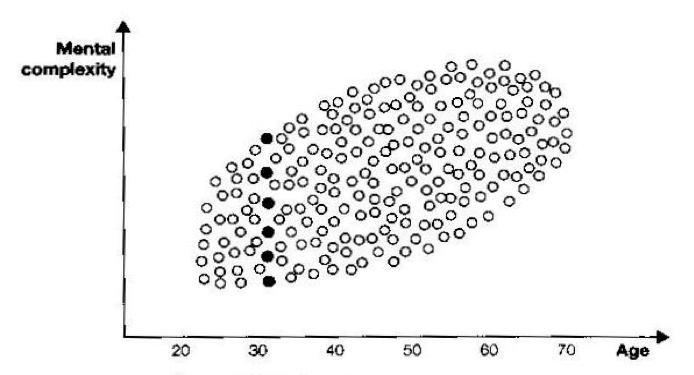 But notice something important about this graph. While the upward sloping cluster indicates mental complexity increasing with age, there is considerable variation within any age. The solid black dots illustrate different levels of mental complexity for six different individuals all close to 30 years of age. The lowest of these six displays very little mental complexity. The highest has the maturity and wisdom of the average sixty-year old! (At the other end of the scale, there are also sixty-year olds no wiser than the average thirty year old.)

What’s the difference between these two people and how does it help a young leader? The key is to be operating with a self-authoring mind, not a socialised mind.

In a socialised mind (estimated by Kegan as 58% of the population), “I am my relationships, I follow the rules”. In a self-authoring mind (only 35% of the population), “I have an identity, I make choices”. Moving from one to another requires a recognition of where you are at today and a desire to mature. Putting it simply, you have to want to grow up.

So, how do you (as a young leader) speak on an even level with people who have more experience? A good place to start is by listening. These people may be not be any more effective than you, but they have experienced many times things you may be experiencing for the first time. By listening, you not only learn, but also communicate that you appreciate that they have this experience and you understand its value.

However, this does not mean that you should back down from leading, from sharing your own views. It is entirely appropriate for you to articulate your vision. Indeed, it’s important for you to challenge yourself to establish a leadership style based on your value compass and sense of purpose, not just executing someone else’s agenda. However, with so much experience around you, it would be smart to democratise leadership responsibilities and show that there is not one leader, but several.

Here are a few of the mistakes you might make and some alternatives:

In a sense, leading when you are young is the same as leading at any age. Great leaders are always maturing, always looking to learn, to improve and to broaden their perspectives.

And once you’ve mastered all this? Well, Kegan says that only 1% of adults have a self-transforming mind. As business and society become more complex, more and more CEOs will need this attribute.

This could be your next challenge!

Anthony Mitchell is the co-founder and Chief Potential Officer of Bendelta. He is an internationally recognised thought leader in strategic leadership. He has been advising companies internationally for the last 25 years, working across more than 30 countries on five continents advising clients ranging from leading multi-nationals and listed companies to major government agencies and not-for-profits.

This was originally published in Dynamic Business. To read the article please click here