Redesigning organisations and leaders for the cyber-physical age

It was a great pleasure to deliver Bendelta’s special event last week on ‘redesigning organisations and leaders for the cyber-physical age’. It has been fascinating to talk with attendees to understand how the event has ignited new ideas and questions for them.

The purpose of this article, whether you attended the event or not, is to crystallise some of the key insights and imperatives for organisational architecture, leadership and learning in the cyber-physical age.

The central themes may be summed up as follows:

Since the creation of the power loom in 1784, we have seen industrial revolutions change business and society.

Imagine for a moment living in the late 18th century in England. Weaving, unlike spinning, was complicated and not amenable to automation. How could movements coordinated by human hand and eye possibly be replicated by levers, cams, gears and springs? The level of precision required was inconceivable. Weaving would need to remain in homes, done by men.

Suddenly, with Edmund Cartwright’s power loom, it was entirely possible. Society changed rapidly. Handweavers lost their jobs, work moved to factories, women and even children did the work. There was rebellion – in 1816, 2000 rioters tried to destroy looms and stoned the workers. But the technological breakthrough improved productivity by an order of magnitude, demand for cloth increased, exports grew and a Rubicon was crossed. We never went back.

Now imagine living a century ago. The assembly line had been developed in the 1880s and applied in simple ways. It was inconceivable that it could go any further. But in 1913 it was applied for the first time to complex manufacturing, as a rudimentary system of rope and winch pulled by a Model T past 140 workers in Detroit.

But this was monotonous work and turnover was high. So Ford introduced the 5-dollar work day and the 5-day working week. He doubled wages but the price of a Model T dropped from $850 to $260. The car was democratised and we never went back.

Imagine the year 1968, within living memory for many of us. The world’s first programmable logic controller, the Modicon 084 was created, replacing hard-wired relay systems with electronic computing power. We’ve lived through the knock-on effects of this and have seen it transform productivity.

And now imagine today, the latest stage of the cyber-physical revolution, as we see all proceduralisable work being replaced through the power of artificial intelligence, deep learning and machine-to-machine computing.

When people look back on this period in 500 years, all they will see is one revolution, with the sophistication and impact increasing as each technological innovation piggy-backs on what the previous ones have made possible.

The constant has been the replacement of low-value human work with some form of technology, whether that’s the power loom or IBM’s Watson, so that humans could do more valuable work, based more on what it means to be human.

But there has been a change along the way. New technologies are eliminating the need for humans to do any work which can be proceduralised. If the activity can be translated into algorithms and protocols, a computer or robot will now always be capable of outperforming us. This is good news. We are no longer simply liberating our bodies, we are liberating our brains from being very poor-quality imitations of calculators and Turing machines. We can now contribute in more valuable ways, just as the first three revolutions enabled.

Indeed, you could say that the cyber-physical revolution enables us to contribute to business performance (and to society and our own lives) through attributes which are quintessentially human. As one of our key Potentiology™ research findings, Bendelta has established the 6 Cs – a mnemonic for the capabilities which are becoming most important in the cyber-physical age. Our best contributions to business performance now come from attributes such as our creativity, collaboration and connection. 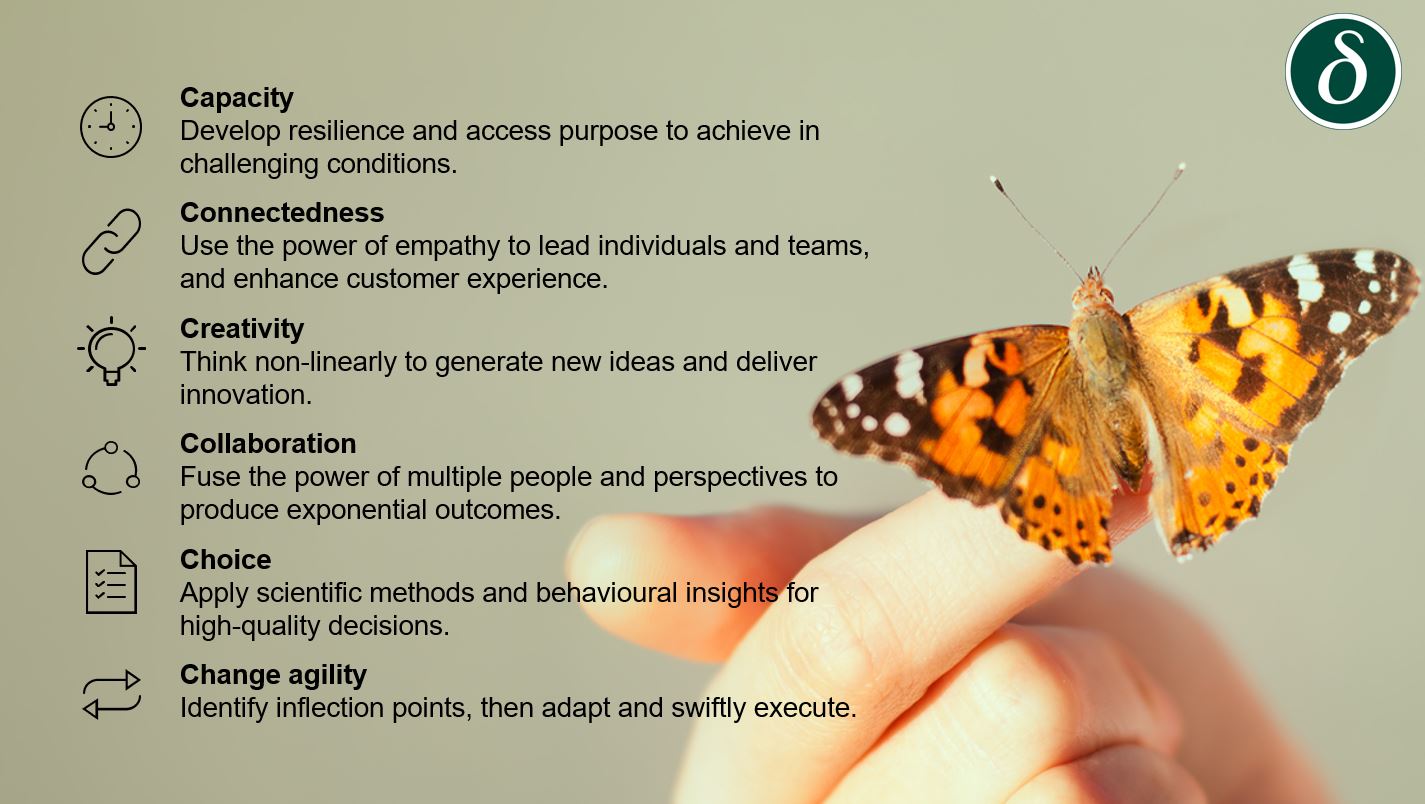 Every time there has been a revolution, we have needed new forms of organisation. The industrial revolution could not work from cottages, the model needed factories to flourish. And in the Henry Ford era, the organisational model of Taylorism traded off a great deal of motivation in the name of uniformity and managerial efficiency. Despite the fact that this model is now well out of date, it is proven remarkably barnacle-like and is still the prevailing paradigm for over 90% of large organisations today.

So if we have needed a new form of organisation every time there has been a revolution, what kind of organisation is needed for superior performance in the cyber-physical age? Definitely not the Henry Ford model, which has suppressed motivation in the pursuit of uniformity and managerial efficiency. In the cyber-physical age, technology takes care of most of the requirements for uniformity and efficiency, which means there is both the opportunity and the need for organisations to be designed for realising much more potent and uniquely human sources of value creation.

We have seen glimpses of the new organisational architecture in many of the trends of the last decade: changing performance review approaches; more flexible working models; agile project management methodologies; the focus on employee experience; 70/20/10 development models; and many more. However, each of these is merely a symptom that hints at the need for broader transformation of organisational architecture that will take place during this decade.

The architecture is critically important so that there is the most fertile soil for human potential to flourish and be applied to business performance. The evidence for the value of this approach to organisations already exists. Think of the newly-created organisations that rapidly displaced long-standing industry incumbents. A common link between these businesses is that they have dispenses with a great deal of corporate tradition and created new organisational forms and practices that are much better at fostering empowerment, egalitarianism, psychological safety, collaboration, creativity and passion.

The other half of the equation is the role of the leader and the direct development of potential, and especially leadership capability. This is absolutely essential for organisations to be fit for the cyber-physical age.

Leaders will increasingly be defined not by their headcount, budget or title. Leaders will be defined by the way that they demonstrate the 6Cs and how they contribute to others demonstrating the 6Cs. The ‘others’ they lead may not be fixed team members or even permanent employees and they may not always be ‘junior’ to them in the organisation. These may be people over whom they have no formal authority but rather inspire through interactions on projects or collaborations.

Leaders will be people who enable others to realise their full potential, individually and collectively. They will help people to achieve high levels of self-determined motivation, through a powerful felt sense of autonomy, mastery, stretch, purpose and connection. Leaders will be those who are deeply insightful about the psychology of human potential and performance and find ways to link this with the organisation’s focus on creating, inculcating or leveraging exponential technologies. Leaders will be those who are able to meld individual employee liberation into collective business performance.

One of our most striking research findings was that leadership development is one of the most antiquated activities in most corporations today and what is considered good practice is hopelessly ineffective.

Our research pinpointed several principles which have the greatest impact on the effectiveness of capability development, based on what works in elite fields. These include, but are not limited to, ensuring that people are outside of their comfort zone, to stretch capability and knowledge, as well as timely live feedback on performance. In most organisations today, even the top flagship programs get a ‘fail’ mark on these principles. Given the impact of leadership and capability on driving performance on the cyber-physical age, this is perhaps the business activity most requiring comprehensive overhaul.

It was a great pleasure at the event to showcase some of the organisations that have been leading the way on either organisational architecture or leadership/capability development. On average, the organisations which are using the approaches we’ve identified are performing at 30% above the average level of their industry. We hope that others will explore how they too can be fit for the cyber-physical age, for the benefit of their people, their customers, their business and their communities.