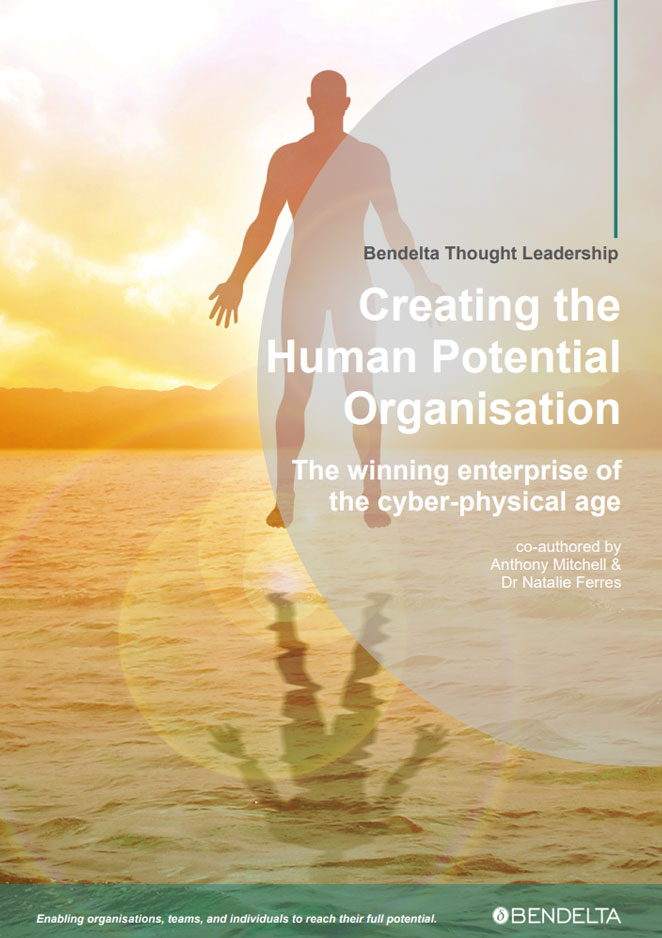 As we enter our planet’s fourth industrial revolution, characterised by machine learning and cyber-physical systems, the unleashing and combining of human potential will be the most important source of competitive advantage.

To succeed in this environment, enterprises will need to become Human Potential Organisations (HPOs).

This paper explains the four foundations of an HPO and how organisations can establish these foundations.

In Beijing in 2008, Michael Phelps was in the final of the 200-metres butterfly, seeking the 10th gold medal of his career to make him the most successful modern Olympian. Phelps already held the world record in this event and was looking to improve on his previous time. All indications were that he would win by a comfortable margin.

As soon as he dived in, his goggles slowly started filling with water. By the time he reached the last length, he couldn’t see anything at all. But he continued on, with no visibility of his position in the pool or in the race. With a few metres to go he made one last stroke and stretched out for the wall at the perfect distance, not being able to see if it was even there. “I dove in and they filled up with water, and it got worse and worse during the race,” Phelps told reporters. “From the 150-metre wall to the finish, I couldn’t see the wall. I was just hoping I was winning.”

When he looked up at the clock he had not only won the gold medal, he had also broken the world record. How did this happen when he couldn’t see the wall, the lane, his competitors, or himself? There were two reasons.

The answer partly resides in a habit that Phelps performed before every race. Shortly before every race began, Phelps closed his eyes and envisioned the entire race, stroke by stroke, from start to finish. He pictured himself making the perfect stroke every time. He saw exactly how many strokes he needed to get from one wall to the next. He played a mental video of the “perfect race.”

Phelps pictured himself making the perfect stroke every time…He played a mental video of the “perfect race.”

So when the time came to perform, he could do it with his eyes closed because he had already worked through how the perfect race would feel. And when an obstacle came up, he could deal with it because he knew he could perform even without seeing the wall in front of him. He knew how many strokes it would take, when to take breaths, and when to stretch for the finish. To put it another way, Phelps had the most perfect and complete mental representation of how to swim the 200-metres butterfly, and it flowed through his entire body. 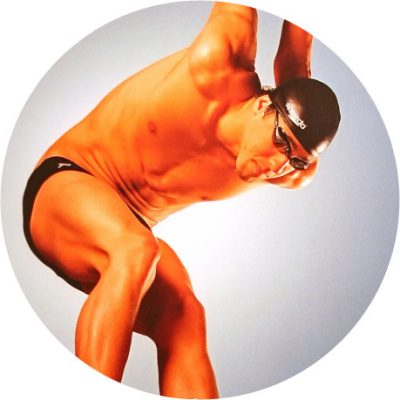 The other reason is that Phelps and his coach had contemplated such a disaster. It was unlikely to occur, but not impossible. Given the commitment to success, even such outside possibilities had to be addressed and eliminated. Accordingly, they had held training sessions in pools at night time with the lights off. Phelps had already swum blind several times before this race occurred.

When asked what it had been like to swim the race blind, Phelps said “Like I expected it to”.

Less well known is the story of Michael Flops.

This Michael was promoted into his first management role as a result of his strong performance in his functional area. As his company, and the industry it was in, enjoyed several consecutive years of high performance, Flops was promoted three more times. It was hard to see whether he had played a causal role in the company’s success, but the correlation was apparent, and he certainly thought he was responsible.

To support his development into more senior roles, the company sent Flops on a leadership program. The program consisted of classroom modules, 360-degree feedback and executive coaching. In the classroom, Flops sat while a variety of lecturers explained leadership frameworks and encouraged attendees to discuss them. Flops enjoyed the program, as most of what he heard sounded like how he saw himself. He was unable to recall much of the content as he took few notes and spent quite a lot of time checking his emails. The 360-degree feedback was interesting but most of it came from people he didn’t see as knowing much about leadership anyway. (On this count, he was correct.) The coach was great, as she listened attentively to his challenges and asked some good questions.

Flops was then promoted to CEO but retired a few years later with a healthy package after the industry had once again boomed. Just after he left, the industry weakened significantly and the company, which was over-exposed in several areas, floundered. Flops wrote a book about his leadership style and what he would have done if he was still with the company.

When an MBA class went into the company to study the decline and to learn more about Flops’ leadership style, they made several interesting discoveries. Firstly, those who’d been Flops’ direct reports directly contradicted his statements about his leadership style. Secondly, they found that there had been no discernible improvement in Flops’ leadership skills as the result of his training. Thirdly, they discovered that his performance over the long term had been no better than anyone doing the same roles in similarly buoyant industries over that period – if anything, his approach may have been responsible for the company’s failure straight after he left.

This spurious case study highlights the fundamentally flawed and ineffective leadership development initiatives in place across Australia and around the world. Despite the time and money invested in them, they are methodologically incapable of building leadership capability.

Fortunately, the end is nigh for uncreative leadership development practices. For that, we can thank the ever-rising tide of business competition. What we will see instead is the rise of a new standard in the development of critical capabilities for leadership success.

Underpinning this are four essential commitments that companies must make. Today, very few make these commitments. Very soon, they will all need to.

Firstly, they must commit to excellence. Organisations will begin to invest the time and rigour that leadership development deserves and requires. Most companies that think they do so today are wrong. The vast majority are so uncommitted to excellence that they are turning out very few ‘Phelpses’ and a large number of ‘Flopses’. Commitment to excellence is not necessarily about spending more money. In some cases, it may mean spending less.
Committing to excellence means: 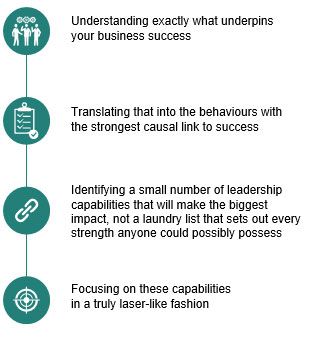 2. Create a pathway to world-class

The second commitment is to create the pathway to world-class.

In the field of business leadership, even the definition of what is required has been little more than a compilation of anecdotes and correlations, characterised by indefensible methodologies and suffused with cognitive biases.

The complex causality of organisational behaviour is used as an excuse for sloppy definition. Leaders say that they have their own style and remain remarkably impervious to feedback on their development needs.

Let’s contrast this with the likes of world chess champion Magnus Carlsen, an international concert violinist, or indeed, anyone in the world who is truly outstanding at what they do. The thing which differentiates them most from the rest of us is something neurological – their mental representations are more accurate, sophisticated and complete than ours.

For anything we do, whether simple or complex, we have a mental representation. This can be playing the violin, driving a car, demonstrating empathy, developing strategy, fostering collaboration or driving innovation. In some cases, this is a complete blank – we have nothing in our brain at all. In other cases, we have a basic sketch, or a reasonable blueprint.
We might even have something close to the real thing. Or if we are Michael Phelps and the capability in question is swimming the 200-metres butterfly, then we might have the best mental representation ever created. So good that we can literally do it with our eyes closed.

While leadership development should unquestionably start with the fundamentals, its trajectory must be towards world-class. In tomorrow’s world, nothing less will be good enough.

What separates the very best is that their mental representations are more accurate, sophisticated and complete than ours.

The third commitment is to use scientific methods and tools. The spurious case study comparison between Phelps and Flops illustrates that while some fields (not just elite sports, but also the performing arts, grandmaster-level chess, Nobel-level science) produce world-class specimens on a regular basis through dedication to ever better methods of developing expertise, the business world has done almost nothing of the kind.

The difference here is science. At its simplest level, science means doing what works, not what you like, what is easy or what was okay in the past.

What many companies today consider scientific methods would in fact appal even those in amateur levels of other disciplines. Science certainly doesn’t mean methods selected on the basis of cognitive biases, post-rationalised and never properly evaluated.

A development program with these three qualities has a good chance of success. A program without these three qualities has almost no chance of making a material impact, other than a temporary spike in motivation if the program was an enjoyable one. In Bendelta’s research, more than 80% of leadership development programs in Australia today lack all three of these methodological foundations, while
over 95% lack at least one of these three foundations. And that’s why Australian companies are producing ten times as many ‘Flopses’ as we are ‘Phelpses’

4. Align the organisation for potentiation 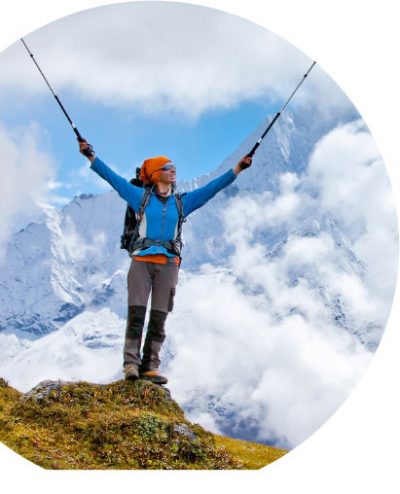 The winning organisations of the next decade will be Human Potential Organisations (HPOs) [© Bendelta 2016].
An HPO does four things extremely well. As discussed, they commit to excellence, they truly understand world-class in the attributes that are most critical and they approach all development with scientific methods and tools.

The fourth foundation is not part of the capability development process per se, but rather is the essential pre-requisite.

Organisations must create the ground conditions for potentiation.

In the same way, that gardeners must first till the soil before growing crops, organisations must first be aligned to create an environment in which development interventions are likely to flourish.

Today, many companies are not tilling the soil. Effectively, they are expecting miracles – hoping that individuals who have been on a development program will somehow operate as outstanding leaders and drive great results when little has been done to make the company the right place for leaders to flourish.
So, what should an organisation do before commencing the leadership development process? 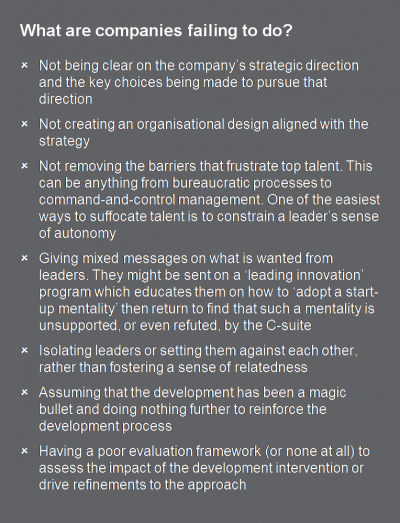 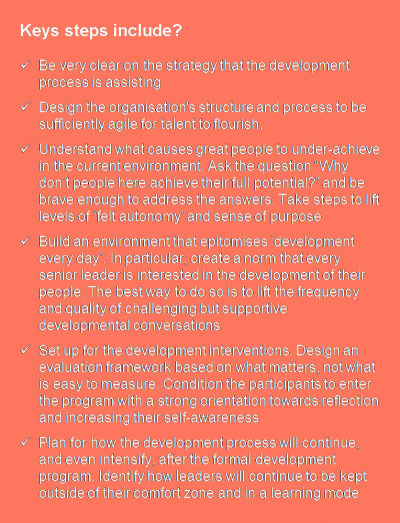 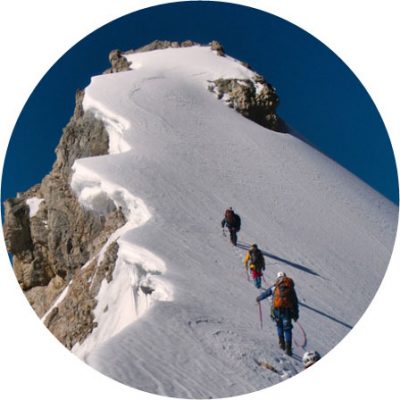 The four ingredients for an HPO are not complicated but are characterised by the commitment required. Once all four are combined and approached with discipline, organisations can feel confident that they can develop the kinds of leaders who will drive their business success.

At the heart of this solution is the recognition that the winning organisations will be those which most effectively realise the full positive potential of their people. This is not simply appealing at a humanistic level – it is a recognition that a team of ‘Phelpses’ will achieve the world-class performance demanded today. The alternative – a team of ‘Flopses’ – is no longer tenable.