The role of human potential in creating exponential organisations

We live in a world where the likes of Uber, Facebook, Alibaba and Airbnb can become a dominant player in the industry overnight, despite their eschewal of conventional business models and their profound lack of traditional assets. This is just the tip of the iceberg – a few hints of what is to come.

Already, we know that the pace of industry disruption means that modern organisations must be truly customer-centred and continually innovating. Many organisations need to transform their cultures to match a very different business model from the one with which they started the decade.

Much more is to come. Two forces will dominate the 2016-2020 period across all industries. 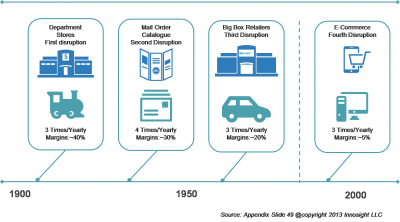 Change will no longer merely be rapid or even continuous. Change ill be in fact be discontinuous – so sharply jarring that proven business models may be violently obsoleted while others rise to sudden prominence. Here’s an example from just one industry (retail) – nothing that even this graphic is obsoleted by the ‘fifth disruption’ currently changing all industries (more on this later):

The rise of machine intelligence will change our view of knowledge work in the same way that steam power and assembly lines changed manual work more than a century ago. The value of human beings in business value will be reframed.

While each of these forces is tectonic by itself, together they will be epoch-shaping. Most people today are familiar with Moore’s Law of Integrated Circuits (the doubling of computer processing speed every 18 months) which we have seen play out very reliably over multiple decades and which in the last decades has brought the rapid ascent of phenomena such as wireless internet, smart phones, Facebook and Twitter.

However, as Ray Kurweil has pointed out, this is simply the latest in a series of paradigms of exponential computing processing growth over the last 125 years – “from the mechanical calculating devices used in the 1890 US Census, to Turing’s relay-based ‘Robinson’ machine that cracked the Nazi enigma code, to the CBS vacuum tube computer that predicted the election of Eisenhower, to the transistor-based machines used in the first space launches”.

This means that changes shown in the graph above become positively glacial when we change to a time-scale that juxtaposes the 20th century with what we can predict for the 21st century: 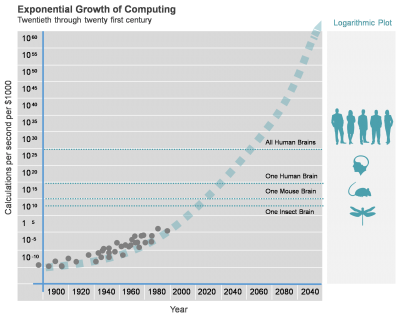 The impact of this is not merely technological. Indeed, the commercial and societal impacts are much more profound. Going back to our examples of Uber, Facebook, Alibaba and Airbnb, one features that they are share is the leveraging of technology to create business ecosystems that increasingly approach the economic ideal of ‘perfect competition’ by bringing massive numbers of buyers and sellers into almost direct contact – revealing the inherent market inefficiencies of the industrial age, where corporations intervene to the such an extent that the market dynamics more closely resemble oligopoly than perfect competition.

Some theorists predict a singularity whereby computers develop consciousness and supplant human beings from all forms of work. Is this likely? In the short term, no. The importance of human beings in organisations will not be eliminated by exponential technologies, any more that it was by the industrial revolution.

However, the role of people will be massively reshaped. Skill in procedural work – or indeed, in any work that an exponential technology can do – will no longer have value. This will eliminate a large percentage of current job families (but replace them with new ones). In coming years, human business value will be located in three broad areas:

This, then, will be the new meaning of leadership: the ability to architect, shape and run organisations in which these three attributes are identified, unleashed and multiplied. Leaders will be defined as those who can achieve the exponential potential of organisations from the potential of people.

Your organisation will not win because of its history or its traditional assets. There will only be one way to win – by realising more of your organisation’s transformational potential. So what are the keys to this?

A. Engaging (which does not necessarily mean hiring) people with more potential – especially in leadership, creativity, interpersonal skill and collaboration
B. Providing the optimal environment to realise that potential – which will probably mean revolutionising the organisation – its rules, policies, structures, culture, work design and work environment to enhance three key drivers: engagement, alignment and potentiation.

Where do you start?

Most organisations start in one of two places (if they start at all). Either they develop a transformation strategy or they engage their leaders to change employee behaviour. Whichever one they choose, the other tends to be de-prioritised.

However, approached in isolation, neither is likely to succeed. For the kinds of challenges described above, strategy and leadership must be approached simultaneously and interwoven to succeed.
Right now, Bendelta is working with organisations to apply ‘strategic leadership’ to the challenges and opportunities of the next five years and beyond. Sometimes through transformation approaches and sometimes more gradually, we are ratcheting up engagement, alignment and potentiation and see the exponential impact of this combination.

We will shortly be realising further reports on the findings in these fields. If you are interested to learn more, please inform your key contact at Bendelta or contact us at: transformationenquiries@bendelta.com

You can also click here to undertake a survey to assess your readiness for developing a 2020 strategic plan.