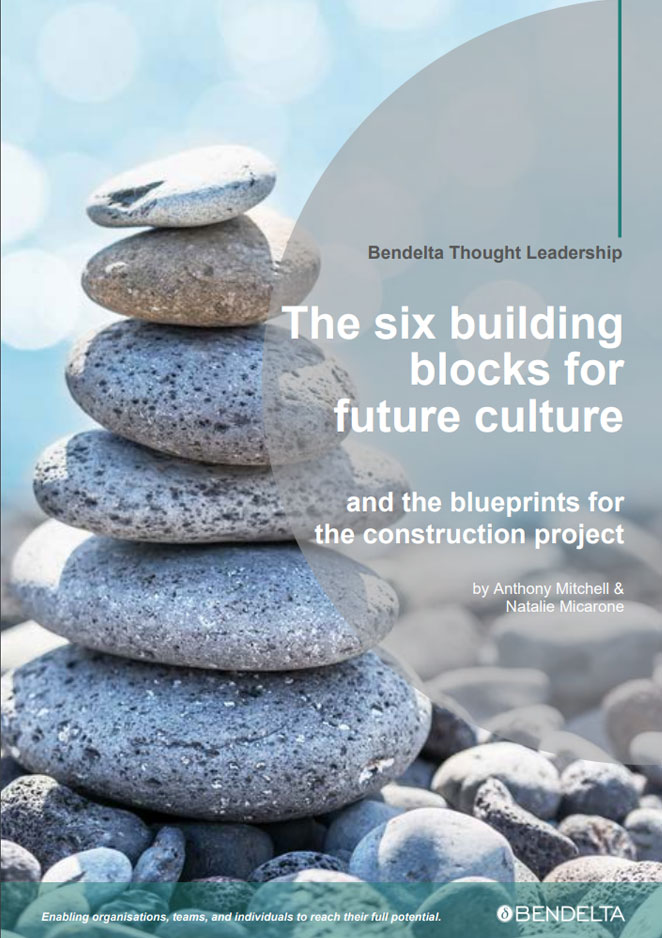 Bendelta was delighted when our client Bayer was a Supreme Global Award winner at the COMM PRIX awards in Canada.

In just a few years, they had embedded an enormous increase in the level of innovation in their culture after taking a highly dynamic and creative approach to strategic implementation and culture change. These gains have paid off in all arenas – greater employee engagement, higher market share and much stronger revenue growth.

How has Bendelta assisted Bayer and other clients to achieve the demanding but essential challenge of culture change?

This article sets out the context for culture change and explicates the methods we believe are imperative to achieving transformational change. Importantly, it also shows how the bar for culture is being raised and how best to respond.

Evolve or perish – The cultural imperative of the new industrial revolution

As luminaries such as Klaus Schwab have observed, we are in the early stages of our planet’s fourth industrial revolution. In 1784, Edmund Cartwright’s power loom ignited the first revolution, with steam power and mechanical equipment creating exponential production efficiencies. In 1870, the first use of an assembly line in a Cincinnati slaughterhouse ushered in mass production and division of labour. In 1969, the invention of the Modicon 084, the first programmable logic controller, was the symbol of the computer age. And today, the rise of cyber-physical systems is just as revolutionary as the last three paradigm shifts. And it is happening now – we are the generation living through the revolution.

At the heart of this progression is the liberation of humans from doing things that we are relatively poor at so that we may do things we are relatively good at. The first two revolutions significantly freed us from using our muscles to be poor imitations of machines. The latest changes are releasing us from using our brains to be poor imitations of computers.

We may pride ourselves on our computational powers but as all the research of cognitive bias shows, computational work is best left to those with no limbic system. When Deep Blue beat Garry Kasparov at chess in the 90s, the writing was on the wall. When AlphaGo beat the world’s best player at Go (a game thought too subtle for computers to ever dominate) 4-1 last year, the writing was carved in granite.

With the advent of machine learning and the embedding of AI into every facet of the internet of things, businesses must change their focus to win. Organisational success in the era of the fourth industrial revolution will increasingly come down to three organisational competences: 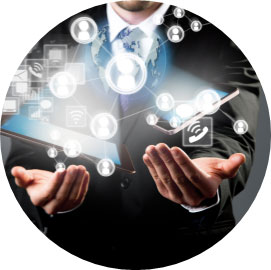 This realisation has led Bendelta to research and describe the universal cultural qualities that organisations of the next decade must have if they are to survive and thrive. You may use different words, and prioritise them as most relevant to your industry and your sources of competitive advantage, but we see all six as critical, universal traits for any business to survive and thrive in 2020:

As Deng Xiaoping once said, “It doesn’t matter whether a cat is white or black, as long as it catches mice.” Yet all of us are prone to cognitive biases which cause us to take decisions which are inconsistent with evidence or logic. This means that every day in every workplace is littered with sub-optimal decision-making.

Our intuitions are wonderful things but when it comes to making decisions, we need a culture that uses scientific methods to catch its mice. As we move into every more intense business ecosystems, our organisations need to be much more like Olympic athletes. Take these words from Swedish 100m butterfly gold winner Sarah Sjostrom who studies underwater video of her technique: “I always have things to improve. Even if I break the world record I still have things that are not perfect in my race. If you look at things in my race (and break them down into starts, breakouts, turns), it’s possible to swim faster.”

Organisations of the future must be much better than today’s at decision making, whether that is recognising and mitigating cognitive biases, automating decision processes to be managed by AI, structuring human decision making and making much greater use of empirical evidence and predictive analytics.

Yet if we are to leverage machine learning and exponential technologies, it is we who must be the source of inspiration. We must use our creative minds like never before. We must find our inner Steve Jobs or Elon Musk.

We all have such capacities (to varying degrees) since they are intrinsic to being human but a century or more of reductive business logic and command and control management has not encouraged it. The exciting news is that the value placed on our ability to use one of the most human of all of capacities is about to sky-rocket.

The epithet that “Knowledge is power” is obsolete in our Wiki-world. As Einstein presciently said, “Imagination is more important than knowledge” and in a time when knowledge is free and ubiquitous, it is imagination not knowledge that is power. 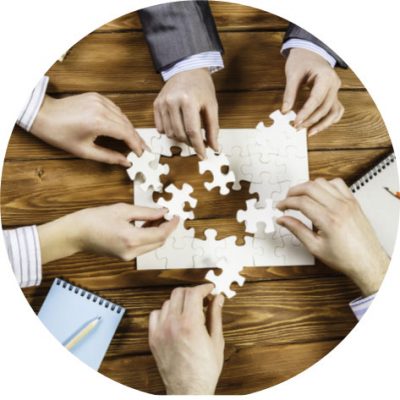 Industries can now be toppled in the blink of an eye. We need to be able to pivot at pace, to pirouette on a dime, using our current and potential customers as our north star.

This is not simply about speed, though that is certainly important. More critically, it is about the cultural orientation towards externally-responsive change. It represents a willingness to change an operating model and the ease with which the shift can be made.

Like the best apps, future cultures must be frictionless.

As we cede computational work to computers, our insight into humanity counts for more than ever. The ability to genuinely see the world from the perspective of others will be both valuable and essential.

A highly empathetic culture has many advantages over others. It understands customers better, it fosters greater engagement and it drives compassionate responses to the challenges we face.

In the best workforces of the future the ability to ‘walk in the shoes of others’ will be skilled, palpable and omnipresent.

We are the only species that creates generational wisdom. And we have the alchemy of collaboration to thank for that: it is the only form of trade where all parties gain while trading away nothing. Everything great that we have today (from physics to civil rights, clean drinking water and vaccines) we owe to multiple people combining their efforts, talents and ideas. Tomorrow’s greatest organisations will be those which can enable this as their standard way of working.

Yet being collaborative remains a great challenge. This is, at least in part, because of the other primal human instinct – to compete. We are perhaps the only primate species that is not lethally hostile to foreign clans, yet even we engage in warfare – whether with neighbouring countries or the division in the next set of cubicles. For truly collaborative cultures to flourish, leaders must excel at unifying people and fostering their collaborative instincts above others.

And what do you get when your culture is scientific, imaginative, responsive, empathetic and collaborative? You get the most important quality of all – the ability to draw from the well of potential that resides in your people, to gain all that discretionary talent and energy and combine it through the organisation (and with other parties) to generate an explosively exponential impact.
The greatest organisations of the future will only be those which are world class at potentiation, for after the fourth revolution, what other option is there?

Of course, you’ll have organisation specific cultural attributes that you’ll desire, in addition to these universals. However, one step we would recommend is to have a meaningful discussion at the highest level, about which one or two of the above six cultural traits will be most important for your organisation and what that will mean for you.

The alchemy of change

Whatever culture you’ll want, it’s almost certainly going to be somewhat different from the one to have today. And can there be anything more difficult than culture change? Is it even possible?

It is complex but as successes such as the Bayer story and others show it can be done.

Bendelta has developed a co-design approach called ‘The Alchemy of Change’ which provides a way to visualise your future state and the keys to reaching it.

Through a combination of research and creative collaboration workshops (assembling both key authorisers and others with diverse perspectives), the Alchemy of Change process generates the key building blocks for the change. These components are brought together in a single framework that both describes the desired future state and provides a framework for progress towards it.

The process by itself cannot deliver the change but it generates clarity, shared meaning and a cogent sense of the focus of the change efforts. Over a series of sessions that are both scientific and imaginative, people develop a holographic picture of the transformation goals and methods. By the time the blueprint is written, the culture change already has momentum.

Despite the extensive design work involved (and the implementation detail that sits beneath), the simplicity of the picture is important. There are three core components to that picture: 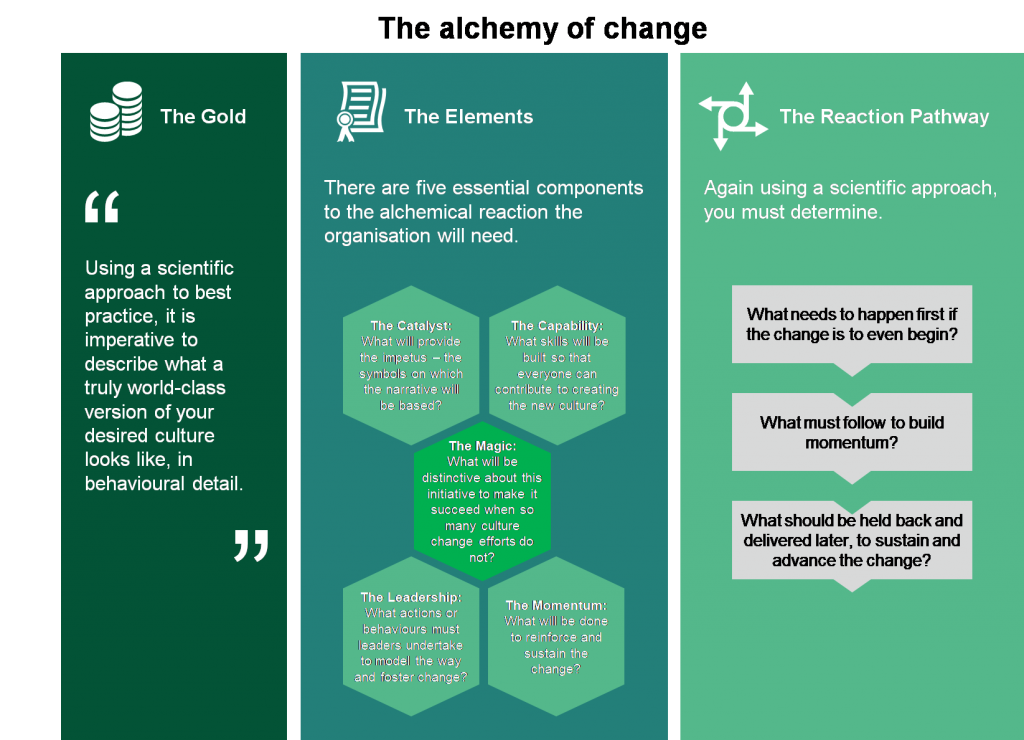 Of course, simply undertaking the above exercise will not change the culture. It is the meta-change that matters – a governance model for change that fully immerses the organisation in authoring and executing the change process.

Despite this being the fourth industrial revolution, artisan metaphors from millennia ago still aptly describe what is needed: when it comes to successful change, every member of the team should be both architect and builder, designing the building and laying the bricks. Indeed, the best evidence of success is when the builders reflect on their work and consider that they themselves were among the architects.